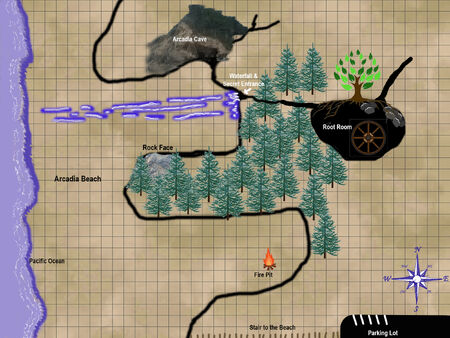 Located in the Barony of Gryphon's Vale, Arcadia Beach State Recreation Site is a beach and state park on the Oregon Coast of the United States located two miles south of Cannon Beach. Under the right conditions, one may hear the "singing sands" a squeaking or violin-like noise.

At least one of the caves along Arcadia Beach is known to be a Tommyknocker entrance into the network of caverns that seem to run beneath the mountains and rocks as far east as the Kingdom of Big Skye (Montana).

Directly across from the cavern, the rockface is actually the side of a cliff that juts out from the woods, topped with pines and firs that bend toward the ocean, the product of years of being windswept.

A close look at the rock reveals that there is a face hidden in there somewhere, or perhaps it is simply an attribute of the natural geology. 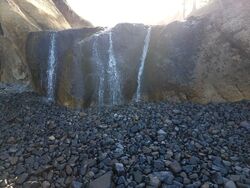 There is a moderate waterfall that pours down one inlet of the the beach, behind which has been discovered a cleft in the small cliff (approx. 30') over which it runs. This cleft leads down a torch-lit corridor and opens up into a large room with an earthen ceiling held fast by an expanse of enormous tree roots above.

There are no chairs in the underground room.  One can see fairly large rocks similar to the type of rock in the alcove that are scattered around the edges of the room, small boulders, pebbles, rubble here and there that have been pushed aside to make this hollow. The root ceiling is at least 7' high, possibly a bit more. 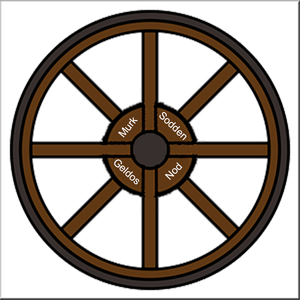 Around the perimeter there are sconces bearing unlit torches. The top of this table is much more ornate than the one at the Afterglow.  Upon it, the outline of an enormous wheel is carved, and there appear to be words inscribed: MURK, SODDEN, NOD, GELDOS.

At least one hall leads off into unexplored darkness, north-by-northeast.