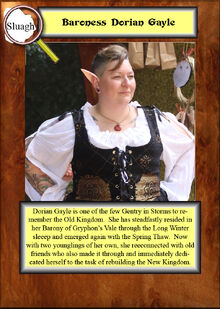 The Barony of Gryphon's Vale comprises the area south of the Columbia River, through the City of Roses (Portland) and down to the Canterbury Fae Hollow (Silverton, OR).

During the Old Kingdom, it encompassed lands more southerly, but during the Long Winter, many borders were lost and forgotten. It was overseen by an old Sidhe known as Ryan Fion Mercury, known to be the moody sort, and an oathbreaker who vanished in the Long Winter.

Baroness Gayle, a Sluagh and old friend of the royal family, was the third member of the Old Kingdom to reawaken with the Spring Thaw. She simply declared the territory around the City of Roses as now a part of her lands, expanding the boundaries of Gryphon's Vale - named after her eldest son who took the moniker Talon, upon his Saining.

With no objections from Count Morbid (within whose Duchy the Barony of Gryphon's Vale is located), the Baroness is now the Gentry of the lands from Portland to Canterbury Fae Hollow. 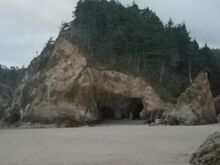 Arcadia Beach: Arch Cape,OR. Formally the Arcadia Beach State Recreation Site. This beautiful stretch of Pacific oceanside is located in northern Oregon. It boasts a number of inlets, caves, waterfalls, natural pools, streams and more. It is popular tourist site in the summer with campgrounds nearby. Click to read more...

Crown Point: Corbett, OR. Originally named Thor's Height, the role of Crown Point in the Old Kingdom is obscure. In the New Kingdom, it seems to be under the care of a Brownie by the name of Kif "Skifflewhim" Brown. There has been at least one artifact, The Thunderbird Egg, found though its properties remain a mystery. Click to read more... 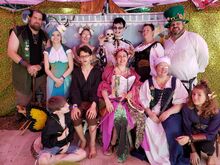 Canterbury Fae Hollow: Silverton, OR The Hollow at Canterbury is a niche gathering spot where the suspension of disbelief allows for the Fae community to gather amongst Elizabethan re-enactors for two weekends out of the year around the time of Lughnasadh. It is one of the portals that allows for magic to be kindled amongst the mundane world.