Court: Seelie In Spring and Summer/ Unseelie In Fall and Winter. 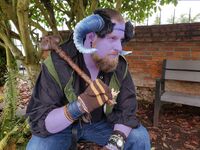 Gunther is a Mountain Troll, descendant of the renowned Jotun Or Ice GIants of Norse Myth. He wandered long and far to Join the court in the Kingdom of Storms as warrior and guardian. He brings with him the traditions and knowledge of his people in order to help educate others about Trolls, and show that not all of them are of the nasty internet breed! There is recently an ancient unknown wisdom that has come from the Troll that many wouldnt expect from a Troll with the name Hammerhamds.

Titles: Protector of the Realm

Awards: Yule Moon 19, 2020: After two years of service to the Kingdom, Gunther became the first resident of the New Kingdom to be raised to Count. In recognition of his heritage and culture, he was granted permission to use the honorific of Jarl. A newly named county. Northern Skies, has become his demense.

Humans refer to my Kingdom (give or take some wobbly boundary lines) as "The Pacific Northwest". It is called Storms because, well, we have a saying: "If you don't like the weather, wait 10 minutes!"

Registered Crest of the Barony of Ulfgard Located in the geographical area around Albany, OR. It is one barony directly north of the Barony of Ashes, Kingdom of Storms. It is currently under the stewardship of Gunther Hammerhands, who is transferring his residency northward in the Kingdom. He remains its guardian until a replacement is found. 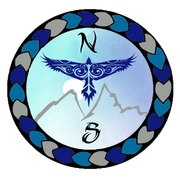 County of Northern Skye New World, located in the Duchy of Cascadia,Kingdom of Storms comprising roughly the area of the PNW Olympic peninsula and greater Tacoma/Olympia area. Encompasses the Barony of Kismet Veil and the Barony of Everbloom. It is ruled by Jarl Gunther Hammerhands.

If there is a thing that needs mending, cooking, crafting or otherwise getting done, don't be surprised if it happens like magic while you weren't looking! Famous Dana is the best of Boggan qualities when it comes to all things involving organization.