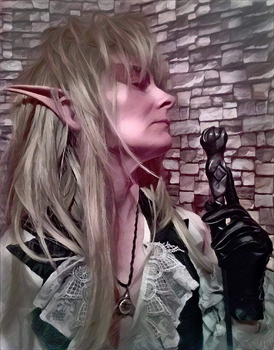 Say your Right words... Be careful what you wish for, as wishes are never what they seem... Such a pity...

There was a human named Jareth Antione Boigess... born in a time where you were either born to serve or be served. He and his family served 2 kings, Louis the XV and Louis the XVI. Whether these kings were worthy of the throne they sat on, they did influence him. He came from a family that had holdings all over France as they were renown for their negotiation skills as upper class merchants, tradesmen and guild masters. Upon their untimely deaths he moved to Austria, and then was sent to England to acquire his holdings there. He never made it to those holdings, but instead was taken in by the Tinker who no one knew was the 12th King of the goblins and a goblin himself. The Tinker fed him fae food, and taught him the other languages. In return Jareth did everything he told him to do, however Jareth did not know he was turning into a changeling. Nor did he understand the little man he worked for was not human. However that was long ago... Once upon a time.

Thus we travel to the present long after Jareth returned to the Chiltern Hills and slipped thru the faerie mounds thus leading him into the depths of the 7 realms of the underground primarily to the realm known as Folaigh where after may many years of proving himself to the denizens of not just the goblin kingdom but to all denizens within Folaigh's borders. The Tinker finally stepped down without any arguments and his successor Jareth was made the 13th and current bearer of the Mantle of King of the Goblins. During that time of proving himself studied and trained in many an art ~magical, martial and scholarly. Thus receiving the titles of 13th Prince of the House of Morrigan, Holder of the ancient magics of the Tuatha Dé Danann, Spell singer and Song weaver of the Brotherhood of Phelan, Regent Roi to the 7 Realms of the Underground, both malignant and benign, Imperial Dream-weaver of the Order of Merlynn, Bond-servant, Caretaker, and Protector to the Ancient Labyrinth.

In his scholarly pursuits he continued to learn many a language including a more modern version of his own French, as languages due change over time, others followed such as German, Austrian, and English. His most favorites tho were of the fae languages that were spoken by the Huldufolk and the Skosgra and he gave the greatest of respects when around any of them. Other languages he worked hard to learn were Goblin, Troll, Dwarvish, Tangwar, Anasim, and Draconic, but his preferred language was that of Owl because it reminded him of she who beran the mantle of the tawny owl feather before he and she who bestowed it on him at the end of her days.

As faerie go on the outside he is Unseelie fae, but just under the skin is an owl shifter, and often has been considered the original sparkling vampire given his incubus blood. His Majesty roams the halls of his castle beyond the goblin city, answering summons to care for the wished away and deal with those wishing away. Once he became Imperial Dream-weaver, the dreaming too became his domain, and he often found and guided thru those lost within the dreams and helped them regain themselves once more. He often divides his time amoungst watching over the dreaming, reigning over his kingdom, caring for his people. And as always the dictates of His Mantle taking care of the lost and wished away. This of course is many a duty so being He who berans the tawny owl feather he often takes to that form when he needs a soothing of spirit, however outside of those rare and precious few moments he almost always remains in his fae form.

It was on one of these flights of fancy and reprieve from the duties of being Regent Roi the 7 Realms of the Underground that he came across the Jackalope poukha, Justinian. The two struck up an odd sort of friendship and wherever His Majesty went the Jackope was soon to follow. After a time Jareth made Justinian his personal scribe, then given his unconditional service bestowed the Knighthood of the Order of Blanc, and also made him the Regent Roi's ambassador from the 7 Realms to other fae kingdoms and mortal places. In a chance to create a solid alliance between the Kingdom of Storms, primarily the Fairy Princess Lolly and the 7 realms of the underground King Jareth offered up his beloved scribe Justinian to Her Highness's personal service. 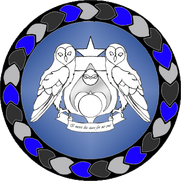 Personal Crest of Jareth from the Heraldic Registry. He is Royalty from the Goblin Kingdom

Crest: New Kingdom, Circular triple braid of Luin, Celeb, Morn (Blue, Silver, Black) on a solid ombre Ordinary of Elu (light blue) with Standard of two owls holding a shield with the Amaranthine horned pendant above banner quote "I move the stars for no one".

Titles: Prospect of the Order of the Sceptre

Regent Roi to the 7 Realms of the Underground, both malignant and benign

He of the Tawny owl feather

13th Prince of the House of Morrigan

Holder of the ancient magics of the Tuatha Dé Danann

Spell singer and Song weaver of the Brotherhood of Phelan

Imperial Dreamweaver of the Order of Merlynn

Caretaker and Protector to the Ancient Labyrinth

Her Highness Fairy Princess Lolly If magic could be bottled in an endless flowing vial, that vial would be Her Highness, the Fairy Princess Lolly. His Majesty has known her for years past counting, and values thier friendship, shenanigans, and alliances to be the ones He not only values but protects. He is often in awe of her magical skills. In the realms of the Dreaming Her Highness's butterfly flutters wings sparkling as one of the brightest!

Jarl Gunther Hammerhands His Majesty holds the good Jarl in the Highest of Regards and often has backed him in adventuring in The Hedge. He finds the Troll's company warm, endearing and true and enjoys his humour probably more then most. The good Jarl's straight forward logic and sometimes frustrations is something he himself can understand. In times of war there would be no question who He would fight beside.

Justinian Blanc, Esquire The two struck up an odd kind of friendship due to both of them being fae animal shifters. Mainly because His Majesty was intrigued by the jackalope poukha, who proved his worth in writing missives on behalf to His Majesty when they would travel together. After Justinian was badly wounded protecting His Majesty when he was trapped in owl form. He was bestowed the Knighthood of the Order of Blanc for those acts of selfless service and made His Majesties personal scribe. When the 7 realms started becoming known to the human realms His Majesty then made Justinian His Ambassador on behalf of the 7 realms of the Undergrounds.

Witchy Poonella: Stranger things have happened then those two being friends. It was because of His Majesty she acquired the services of Puss in Boots. His Majesty's prior having had numerious dealings with her distant cousin The Baba Yaga and at the time needed to use one the spare houses on chicken legs she voraciously has the corner market on. In time however and the returning of his magic thanks to some bone, sweat and tears on both their parts he passed the traveling house on to WitchyPoo and when she is not traveling abroad His Majesty visits His longtime friends WitchyPoonella and Puss in said home when he ventures to the tangling shadowed woods of the Darhrenwood realm. Between the three of them you can be sure chaos is always a happenstance.

High Queen Oona: Believe it or not they are half siblings, as it is not widely known, neither really chooses to define how that is a thing, being of the upper eschelon of gentry neither is it questioned by others. As she is a Goddess to the lesser fae he respects that, but it does not stop His Majesty from adoring his Royale sister and would do anything for her. And has.

Greml'n Rouge “Grim”, “Imp” Rumours abound over who the Grim otherwise known as Greml'n Rouge really is, His Majesty knows full well who this fiesty mischief maker is. And watches over him when his is often running amuk with the fiery gang and makes trouble for thier queen. As often the case in the 7 realms of the Underground, things are never what they seem and Grim embodies that very well.

Porcini Rufflebottum ni Rufflebottom: The Rufflebottoms, Myconid folk have long been in service to the Underground but Porcini has personal connections to His Majesty, like with the High Queen Oona this is not a widely known family connection. The whispers amoungst His Majesties court is that Porcini is actually His Majesty's long lost daughter but those are only rumours... aren't they?