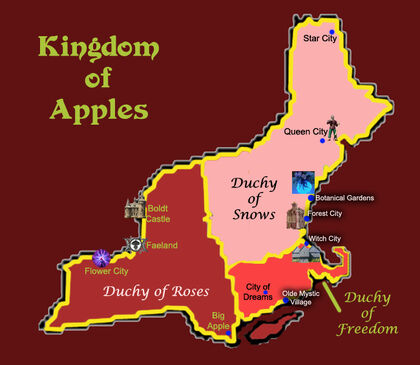 The New Kingdom: There are no known Fae that have awakened with the Spring Thaw, at this time.

The Old Kingdom of Apples was ruled by the Sidhe, Queen Mab - often thought to be a somewhat mad queen, before her fall during the Cold Winter.

It was a popular Kingdom for Trouping Fae, sympathetic to the plights of the common folk.

It was comprised of three Duchies: Snows, Roses and Freedom.

Retrieved from "https://newfaerie.fandom.com/wiki/Kingdom_of_Apples?oldid=786"
Community content is available under CC-BY-SA unless otherwise noted.