Order of the Chrysanthemum 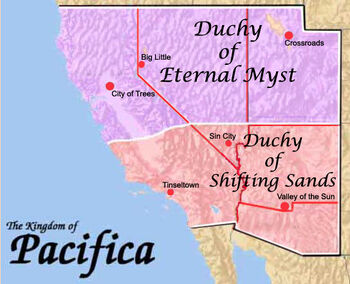 The New Kingdom: Pacifica is in the Southwestern United States covering roughly the area of California, Nevada, Utah and Arizona. The New Kingdom is ruled by Queen Daynette (?), who resides in Meadow City (Las Vegas). During the Old Kingdom, it was ruled by King Orion but he disappeared during the Long Winter, never to re-awaken with the Spring Thaw.

The Old Kingdom:The Kingdom of Pacific covers the Southern half of the west coast.  It is divided into two Duchies: Eternal Myst (in the North) and Shifting Sands (in the South).  During the frontier days, the Wild Fae vied for lands practically radiating with gold, silver and other shiny metals that are particularly cherished by Leprechauns, Tommynockers, Dwarves, Pixies and the like.

Consequently, these fae forged ahead the Silver Path as fast as they could, seeking treasures galore.  When one particularly ambitious Sidhe – Orion – attempted to claim the entire west coast as his demesne, their was a tumultuous uproar from the fae in the northwest and a clash ensued.

After a struggle, an accord was reached to draw the border between Kingdoms along what humans called the NorCal border.  The West Coast was split into Pacifica (in the South) and Storms (in the North).