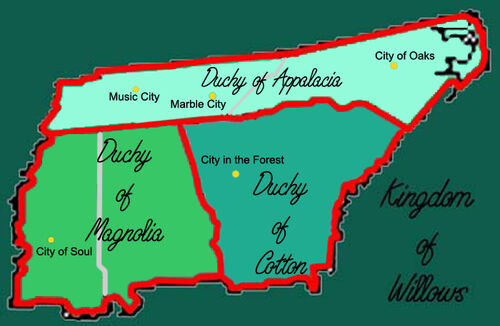 The New Kingdom: After the Long Winter, Willows has been left without a monarch. Nevertheless, the Fae awaken with the Spring Thaw much as they have elsewhere - to find thems'elves in a modern world of pocket in-between spaces where they flourish

The last known monarch was King Meilge, though very little is known about her, or what happened to her in the events which lead up to the Long Winter, from which she never awoke. The only known Duke was recorded as Brand Mistgrove, but he too was lost to the cold.

A crimson ship moored by night, carried on frothing tide''''''Forbode a treasure quest by men, bearded and moon-eyed

Stone homes of the Moon-eyed People.

Our human ken, the Cherokee and the Creek tribes, were shocked to see men of such stature. More hair than a rabbit’s hind and shoulder height to a black bear.

Hidden in the treeline, they watched as red ship dropped anchor under a sliver of moon. From that distance, they were nothing more that stout black shadows, the oars of their landing boat slapping the waves aside one by one.

Once again, that glistening garnet set sail beyond the horizon and the wee men began their mysterious work ashore. Only the aches and groans of moving earth could be heard far off, blanketed under the dark new moon.

The change in geography was nearly imperceptible to those tribes keeping watch night after night. When the elders spoke of it later, they would swear that the squarish stone ramparts had always held the coastline.

The silver moon rounded out and sounds creaks of shifting rock faded until she waned once more. The moon-eyed masons waxed and waned and soon their presence was forgotten. And so it went for a solar circle until.

Mother Nature once again dressed herself in garments of golden-hued harvest. No one noticed how heavy the humid air was that year. The tribes rustled like autumn leaves, anticipating the annual feast. Apples and corn were piled in woven baskets, acorns gathered and the finest leaves dried for pipes.

Offerings of little cakes and birch beer were prepared in hopes of receiving a blessing from the mysterious Nunnehi. It was said that these human-like visitors were actually the magical ancestors of the native peoples who watched over and protected the tribes.

Evening fell and the bonfires blazed. The rhythm of hide-bound drums pulsed in time with the leaping flames. From the edge of camp a small envoy was drawn inward on the melodies of wooden flutes. They solemnly ate their cakes and ale, mingling amongst the revelers, speaking quietly here and there.

When the daughter of the Chieftan saw the visitors, she immediately knew them for who they were and brought them forth to her father. The Chief boldly extended his forearm in welcome, but his embrace was not clasped.

Suddenly, a thick pall hung over gather. Song hushed like a scolded child and finally the Nunnehi asked, “What deformity has plagued the stone cliffs?” The Cherokee exchanged nervous glances. Had something happened to their lands?

“The stonewalls are as they ever were.” replied the Chieftan, the weathered lines of his brow drawing together. “What is meant by this?”

“Have you not seen how the willows droop heavy, weeping with water stuck in the air?” Now, the silence was thick as humidity with the tribe enrapt. “While you custodians have forgotten your duty to the lands, the Moon-eyed Men have moulded great barriers of stone homes, shaped from the Earth herself.”

The Chief’s face burned with firelight and shame, for he recalled now the crimson boat and the squat men it left behind. “We will send a scouting party to see what can be done.”

“It is too late,” replied the ethereal host. “Their stony bulwark has trapped the water inland and your negligence will cost you a great portion of your crops, as they quickly rot in the wet air.”

A single nod from the tribal leader indicated that he understood.

“May this be the only warning that we need ever bring.” The mysterious envoy receded to the shadowed banks where they submerged to their home beneath the river.

The Old Kingdom was ruled by King Meilge, who fell to the sleep of the Long Winter and did not reawaken with the Spring Thaw.

The New Kingdom is tentatively governed by the High King Finvarra & High Queen Oona of Knockmaa Hill as stewards until the next King or Queen emerges to take the throne.