These are the Orders and Guilds known both Old and New and what is known about them.

Orders are groups of (usually noble, but not limited) Folk that center around shared goals, common pursuits, fields of knowledge and study or ideals and practices.  There may be an Order of the Scroll whose job it is to keep track of the formal writs, laws and paperwork.  Perhaps an Order of the Red Thorn, who embody the dedication and focus of martial training and practice as their forte.

Origin of Orders and Guilds

The establishment of these internal groups has two primary origins: 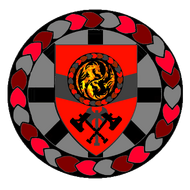 The Blackwatch is a sturdy order that formed after the Spring Thaw, coming together initially at the Midsummer Games. They were established by Percy of Blackwatch, their first Captain, who took the duty upon himself to provide security and first aid to the realm, especially when large gatherings convene. Their current Captain is Fenris the Grey.

Order of the Chrysanthemum[]

Order of the Crystal Circle[] 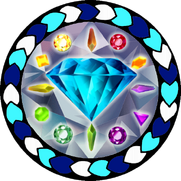 The Crystal Circle is an organization of Fae who are magical academics and stewards of ceremonial proceedings, enchanted artifacts, relics and other magically valuable or dangerous items and knowledge.

This order, dedicated to the pursuit of tactical sorcery and divination in all its forms, is said to have originated with the a race of black-eyed, albino-skinned people, thought to have resided in Appalachia.  They were noted for their mysterious construction of stone structures up and down the coast. They were possessed of an uncanny ability to shape and work with stone, including using them for runic fortune-telling, arrowheads and more.

The Ovates are the lore-masters, storytellers and folklore experts of New Faerie. They are the spinners of the very thread that enchanted souls weave into the fabric of epochs. It is their duty to record the Barkscrolls and keep the knowledge and history of all Fae-kind alive.

Order of the Sceptre[] 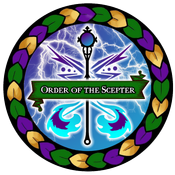 A Knightly Order whose purpose is to protect the crown, the kingdom, the Scepter, each other, and to keep the Treasures of Talon from falling into the wrong hands or under the control of one person.

Guilds are groups of (usually non-noble, but not limited) Folk that center around shared trade skills, talents, hobbies, etc.  They can be formed around nearly anything such as a Guild of the Spindle for weavers, tailors, seamstresses and fibre workers of all sorts;perhaps the Guild of Clockwork comprised of makers, tinkerers and inventors of all types; or a Guild of the Cauldron for all those cooks and foodies out there.

Guild of the Sable Cauldron[] 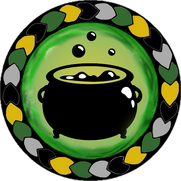 The Guild of The Sable Cauldron is a group of craftsmen and women renowned for their skill in the art of all things brews, concoctions, potions, tinctures, draughts, elixirs and tonics, both deadly and delightful.

A product of the Old Kingdom.  This was a collection of Fae comprised of the House of Commons and the House of Lords and a Magistrate to adjudicate proceedings.  Its stated purpose was to act as a voice of the people to monarchs of the Kingdoms; a forum to address topics of concern or proposals for change.  As membership dwindled with the Long Winter, it eventually fell into ruin and ceased to be.

Withstanding from the Old Kingdom, Tír Eolas has been a long established school of Fae Magick (glamour & hedgecraft), Arts, Academia, Research, and more. Tír Eolas still exists today and is responsible for producing a number of workshops, meditations, spells, rituals and other learning material regarding the Ars Magica.

It is the exclusive prerogative of Trouping Fae or higher to both join as members and/or found Orders, Guilds or other proposed institutions and groups such as Tír Eolas Academy or the Parliament of Dreams.

The steps for establishing one are as follows: