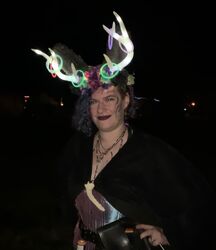 Nettle is the first Jackalope to reveal themselves in the Kingdom's history. One of the changes brought on by the Spring Thaw was the diversification of The People. Fae kin previously confined to the Hidden Realms began to emerge more visibly than ever before in the history of the Folk. The Great Thaw has begun to reveal enchanted folk rarely before seen in the modern era - and Nettle was one of the first in the Kingdom of Storms, making their debut at the Fairyblossom Midsummer Games 2018.

How they came to connect with the New Kingdom is unclear but it seems to have something to do with Count Albin Morbid III. Indeed, it was at the Samhain Dumb Supper in 2019 that Nettle, through some Unseelie shenanigans, manage to wheel and deal themselves into the second Knighthood of the New Kingdom, swearing fealty to Count Albin Morbid III for deeds that yet remain obscure.

Upon receiving their official title, Nettle chose to take the gender-neutral honorific of Ser, rather than Sir or Dame. It is the first of its kind and reflective of the progressive stance of the Folk in the modern era of this New Kingdom blazing an example of forward thinking for the Fae.

Nettle is not yet in the Heraldic Registry